The kitchen is an important room in any house.  It is the nerve center, the gathering place, and where we spend most of our time.  Because of this, we spent a crazy amount of time and energy planning the layout for this room. It was like a giant puzzle – trying to marry an efficient and logical workflow with our aesthetic preferences.  It’s easy to walk into a space when it is complete and notice that something isn’t right.  Maybe the sink is too far away from the oven or maybe the trash can, sink, and dishwasher are arranged in a way that makes washing dishes a real pain. What is much more difficult is to anticipate ALL of these things when the kitchen is just a sketch on paper.  We did a LOT of standing and imagining…  and even after all that time, I still wasn’t 100% positive we had it right before the time had come to finalize everything for the electrical work.  But, after living with this kitchen for a while, I actually feel pretty good about the final result.  That’s saying a lot coming from me, Mr. Overly Critical.

By the way, if you didn’t catch Part 1 of the kitchen reveal, check it out.  If you did read Part 1 and were disappointed to not see anything actually revealed…  well, sorry about that.  We will try to make it up to you with LOTS of revealing pictures in this post.  Wait.  That didn’t sound right.

What most people notice right away when they walk in is that it’s a BIG kitchen with lots of open space – especially for an old house. Despite the available square footage, we eventually decided against adding a kitchen island.  We already have plenty of counter top surface and it is nice having the middle of the floor open. 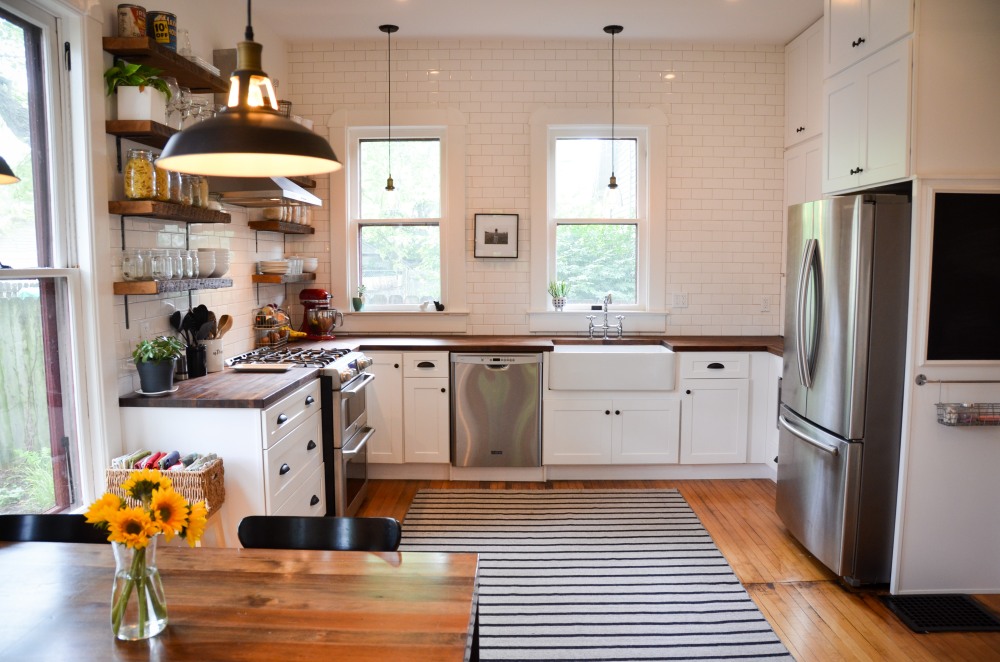 When we were designing the space we wanted to find a way to incorporat hints of the original historic aesthetic and age of the house while also keeping it new and fresh.  We didn’t want a kitchen that stuck out as a modern space in an old house, but we also didn’t want to try to make it look old.

We tried not to choose finishes that were too trendy or would look dated in ten years.  Of course we realize that farmhouse sinks, subway tile, and white cabinets are “in” right now, but we hope that these choices come across as logical for the vibe of our house.  Actually, when our house was built, Victorian kitchens were often all white and subway tile was popular in kitchens and baths. 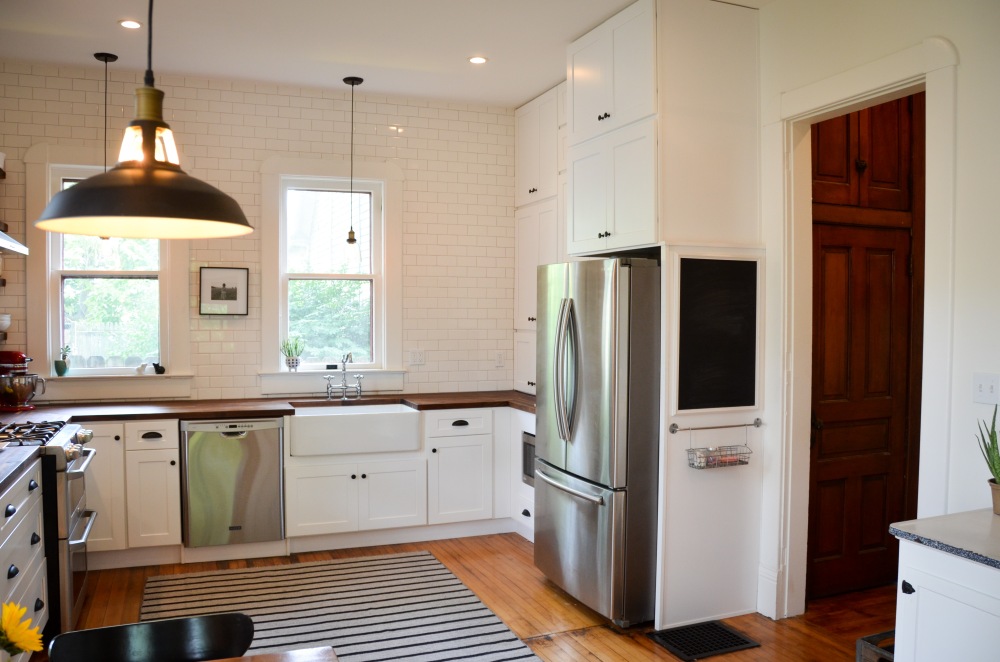 We kept some historical elements, such as the white cabinet on casters, the wooden pass through door, original flooring, original doors, windows, trim, and created open shelving made from our own floor joists. 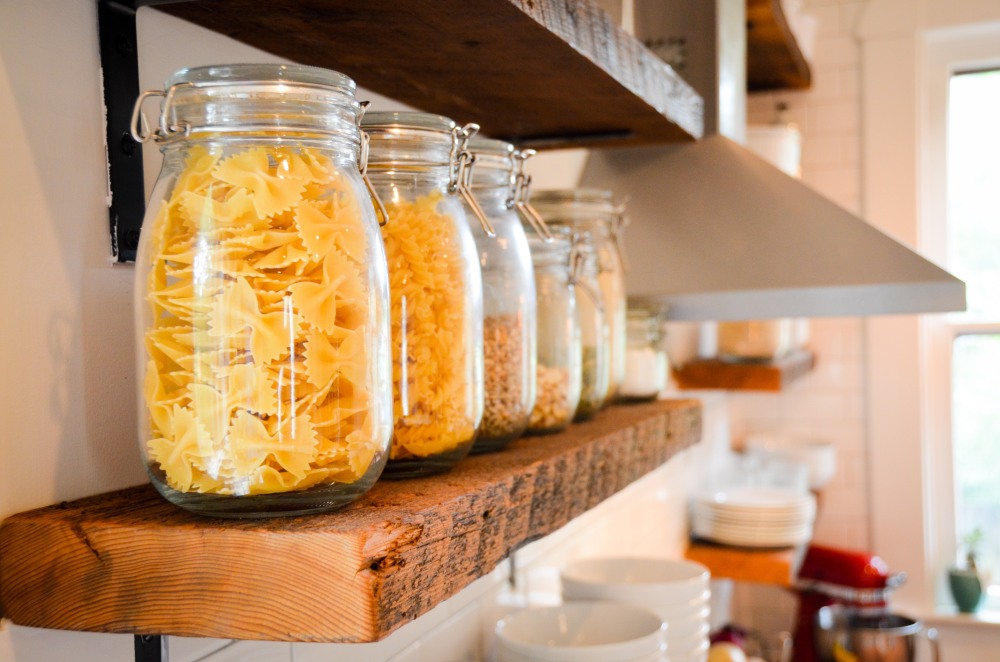 I’m pretty sure Amy would agree with me when I say that, out of the whole house, the kitchen was the most consistent source of marital stress.  Sooooo many decisions packed into one little space…  lighting, plumbing, outlets, appliances, cabinets, counter tops, faucets, knobs, fixtures, and on and on and on.  That is exactly why professionals get paid a lot of money to design kitchens and also why kitchens are so expensive.  I don’t know exactly how much money we spent on the kitchen, but I know it is a lot less than the average. Of course most of that is because we did all the work ourselves, but also because we didn’t get carried away with the latest and greatest kitchen upgrades.  We were able to keep costs low in most areas, which meant we could splurge in a few other areas – like the faucet and sink. 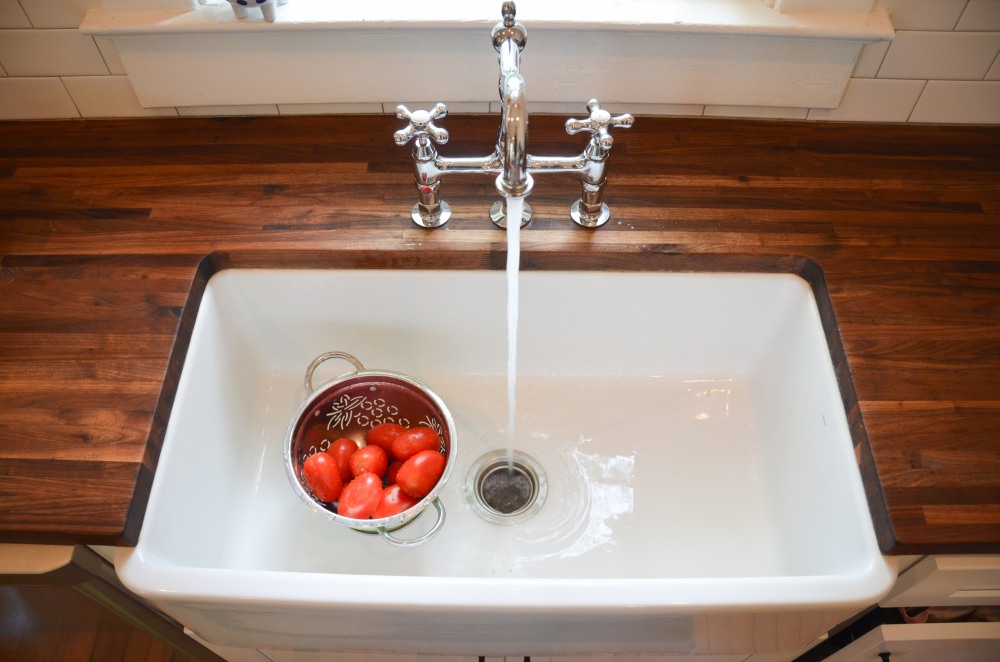 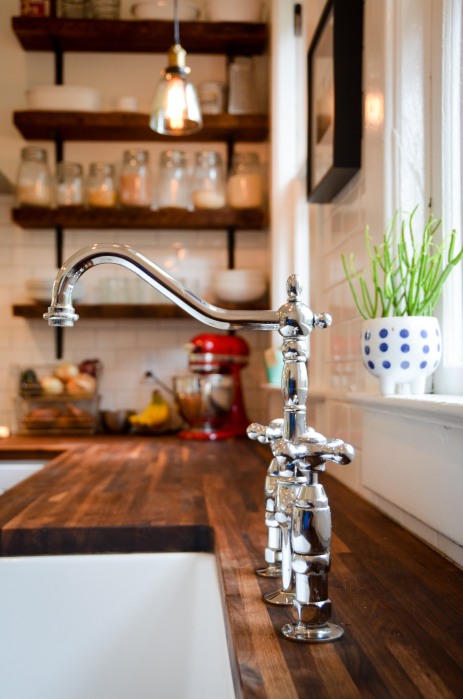 We only spent $800 on the countertops, including our own labor on fitting, installing, and finishing.  Now that we have it, I can’t imagine any other type of counter top in this kitchen.  We did briefly look into other surfaces, but they were so expensive and just didn’t seem to make sense with the more rustic nature of the space.  The butcher block counter top is easily my favorite part of the whole kitchen.  Speaking of countertops…

Last year, when we blogged about the counter tops, we mentioned that butcher block isn’t for you if you want perfection.  I think we need to go back and clarify that statement.  In reality, if you are willing to occasionally invest just a tiny amount of work (I really do mean tiny), you can keep your butcher block looking like NEW!  We use a natural oil to treat the counter top (as opposed to sealing it with something) so it is easy to sand out any small imperfections and then re-treat it.  For instance, these black circle marks were left by a wet cast-iron skillet that we must have forgotten about for too long.  Now you would never know anything had happened.  But really, besides this huge mark, which was easily removed, we have had little or no issues with water marks, stains, or scratches.  It looks the same as it did a year ago.

The one original historic element of the room that we just could not figure out how to work into the new kitchen was the old sink.  The high back made it impossible to fit under a window.  Using any of the other wall space for the sink made the whole flow of the kitchen awkward….  trust me, we tried every possible scenario.

It still makes us sad that this sink is sitting in our garage right now instead of in our kitchen, but I think deep down inside we hold out hope that we will find a way to put it to good use someday.

As we mentioned, we splurged on a large farmhouse sink.  We weren’t sure that we would like having just one single large basin, but it does make it easier to clean large pots and pans.  Plus, we just think it looks cool! 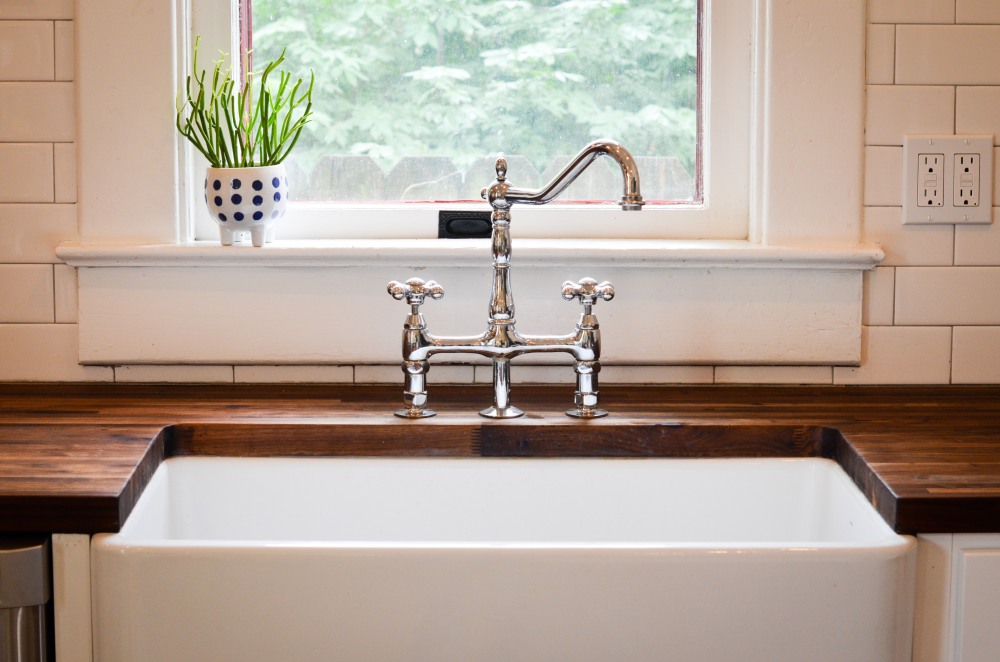 We drug our feet forever on buying cabinets until we got a recommendation for a cabinet company from a neighbor and then an extra nudge by a SALE.  Prior to that we had looked into IKEA cabinets because they seemed good for the DIYer, but none of the cabinet styles or finishes seemed to work for us. We also considered trying to salvage old cabinets and repaint them, but we had a pretty specific cabinet layout in mind and we weren’t going to be able to recreate that with old cabinets.

Here is the drawing that we brought into the cabinet store.

Since we did the cabinet installation ourselves, we were able to customize a lot of detail elements, like the wall around the refrigerator, the toe kick in front of the dishwasher, several added trim pieces, and this modification for an under-counter microwave. 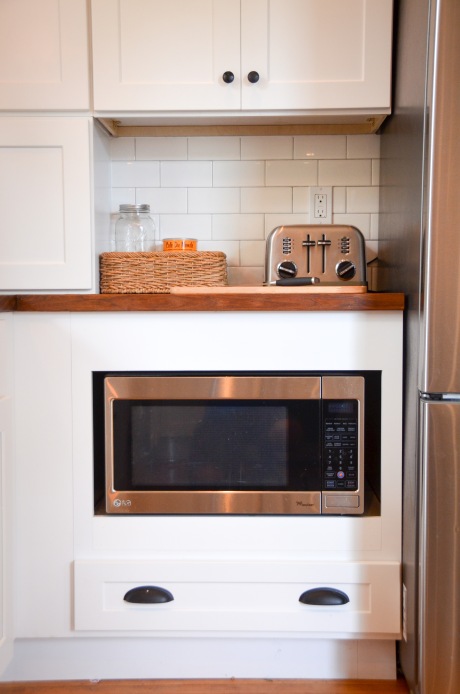 One silly reason it took us a long time to call the kitchen “done” is because we couldn’t decide what type of chairs we wanted.  A couple weeks ago we saw these chairs in a store and knew they were IT! 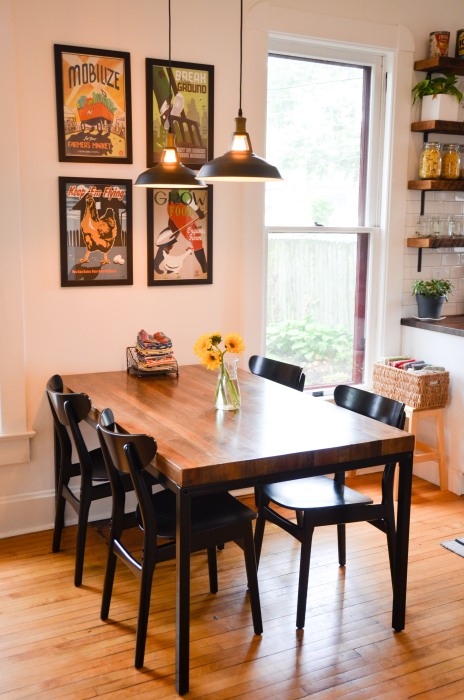 Another thing that held up the kitchen renovation was the rehab work on this beauty. 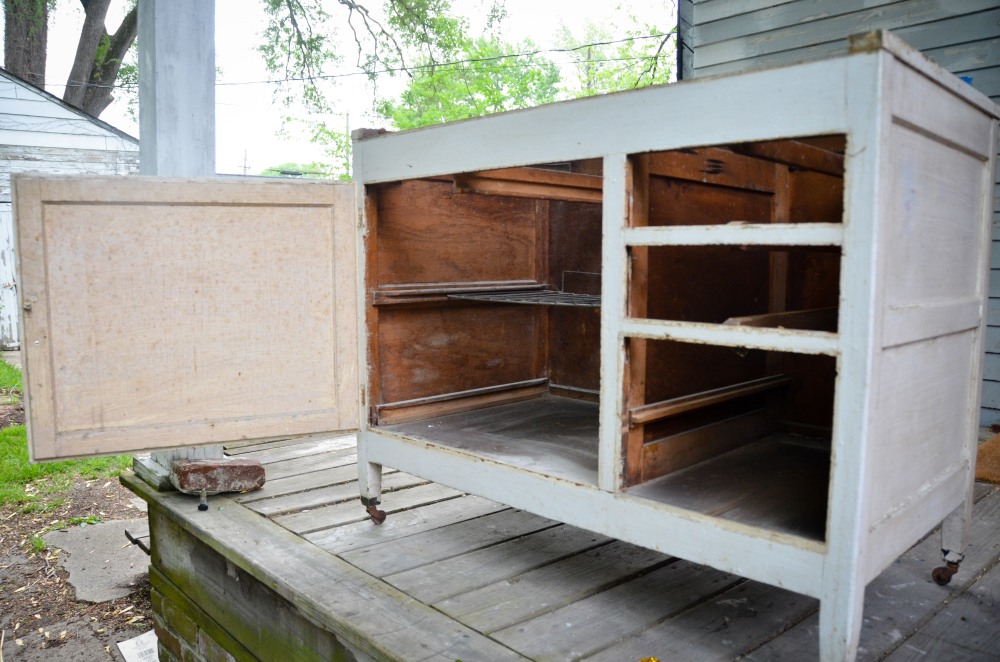 We haven’t previously blogged about it, but it was in the kitchen when we bought the house and has thus been a fixture in our house since day one.  It wasn’t hard to clean up the hardware and repaint, but it just took us a ridiculously long time to get around to doing it.  We don’t know what this furniture piece is officially called, so in our house it has always been called “the white kitchen thing.”

In the beginning it was a valuable storage place for tools and a rare table top surface for a wide variety of projects. Now it is the perfect place for lunch boxes, Lucy’s silverware, and other lunch packing supplies.

Every kitchen needs a place to put mail, keys, phones, and miscellaneous items you don’t want on the kitchen table.  Well, this is our place for that stuff.  As well as being convenient, it is the perfect furniture piece for that space!  Another antique item that we discovered in the house was this milk crate.

It was found in the crawl space and now serves as a convenient storage spot for water bottles.

One of the great features of the kitchen is the light!  Two giant east-facing windows bring in wonderful morning light while the two south facing windows keep it bright all afternoon.

I was initially concerned that the floor would not look good because of all the old staple holes, salvaged and mismatched wood, and other imperfections.  But the worst of it is covered by the rug and the rest of it just helps to give the room an authentically old, warm and casual feel.

Remember that Joe and I are teachers and one goal with the entire house project was to stay within a budget that would allow us to have an extremely low house payment. We have stuck to that financial plan every step of the way, despite some laughter from sub-contractors way back when (whose laughing now?).  Here are some things that we did during the kitchen renovation that kept our kitchen budget low.

There are still a couple little things left to do…  for instance, our oven doesn’t sit flat against the wall due to the location of the gas line coming through the floor.  We also still don’t have our vent hood quite right.  In addition, I’m sure we will also continue to tweak other aesthetics choices as we go.

When we bought the house, just living in it seemed like a distant and abstract idea.  It wasn’t until we sanded the floors and we could sit down or walk around without our shoes on that it started to feel like a place where anyone might want to live. It was the first time it felt like this house was actually going to be our home.

The picture below was taken at our first official family dinner in the kitchen on the day we moved in.  It was an amazing feeling just knowing we’d made it that far and for a long time we were content with a pieced together kitchen of free-standing appliances and garage storage shelves.

Three years later we finally have a finished kitchen. Doing all the planning, restoration and labor ourselves, combined with learning how to live without a fully functioning kitchen, makes us feel so extra grateful for the journey and also the modern luxuries we now have. You know – like running water, light, and a sturdy table! 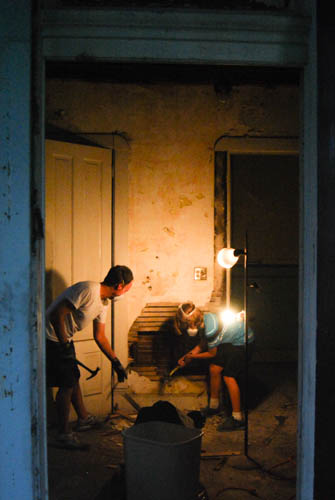 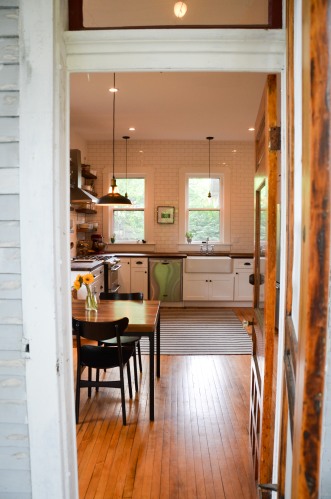 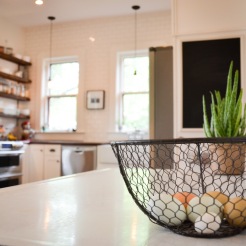 Next up….   a reveal of the downstairs bathroom!