The vestibule has probably received the least amount of attention on our blog.  In fact, when Amy and I would think through the list of rooms we had left to work on we would always forget about the vestibule, despite the fact that the walls were still exposed plaster, the floors were unfinished and suffered from old water damage, there was a bare lightbulb dangling from the ceiling, and we hadn’t refinished the wood trim yet.  We liked to joke that in some ways it was nice having the vestibule look like this…

…because it lowered the expectations for the rest of the house.  Really, between the unfinished exterior, the absence of landscaping, and then the vestibule…  it must have been a little surprising for guests to find the majority of the interior looking more or less complete!

Before we show off the new and improved vestibule, let’s take a quick spin through the renovation work in this room.  Here was our very first view of this space 6 years ago. 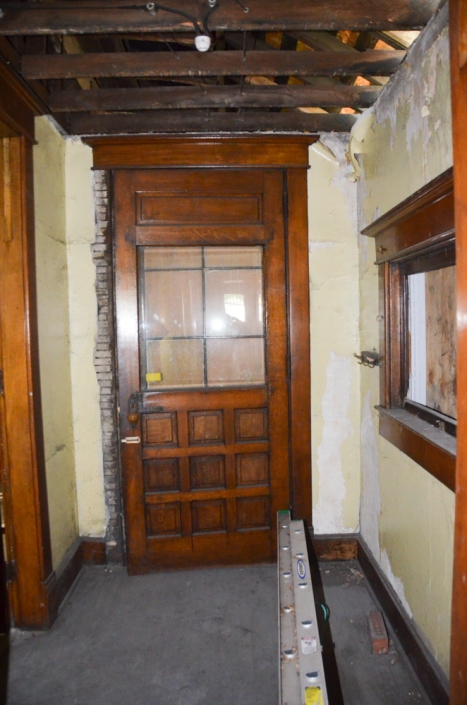 It featured a huge door that wouldn’t fully close, boards on the window and door, a missing piece of trim from an old break-in and burglary, and a missing ceiling that left the house open for any curious furry critter and rain water.

For the first year of our renovation we never actually entered the house through the front door.  Entering any door to our house involved unscrewing a large board to get in, but the back door was smaller and had fewer screws – so we used that one.

[Edit from Amy: In the year before we moved into the house opening the front door happened very infrequently. But, each time we opened it it was a dreamlike reminder that one day we would actually live here and walk through that doorway everyday without thinking. The open front door was like a sneak peak of our future here. Most days I do walk through the door without thinking, but sometimes I stagger at the realization that we actually did it.]

After Amy ran the new wiring for the porch and vestibule, we were at least able to put up a temporary plywood ceiling to keep out the cold air (and animals).

We removed old painted wallpaper to expose the original plaster and then, after insulation, an actual drywall ceiling was added. 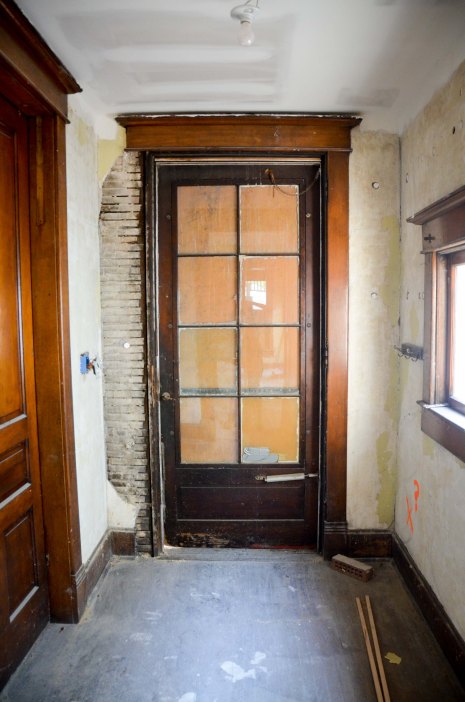 Notice in the picture above that we still have the original storm door!  Now that I am looking at that, it is occurring to me that I haven’t finished that door yet.  I think Amy and I are still debating if we want to install the storm door or not.  It’s beautiful all by itself, but so is the main door.

Speaking of the main door – the next project was to remove the huge beast of a door and refinish it.

[Edit from Amy: We’ve moved this door a handful of times and it is SOO incredibly heavy. It’s an enormous castle door. In person, it’s way larger than what you would expect a door to be. It’s a special feature of our house that people often comment on in person but doesn’t come across as grand on the blog.  I’ve never been so glad to be done with moving this beautiful hunk of wood and glass around.]

The only other thing we did before moving in was priming the new ceiling and adding a few hooks on the walls for coats.

Finally, about 6 months ago (five years after moving in) it was finally time to finish this space. We began, as always, by refinishing the woodwork. 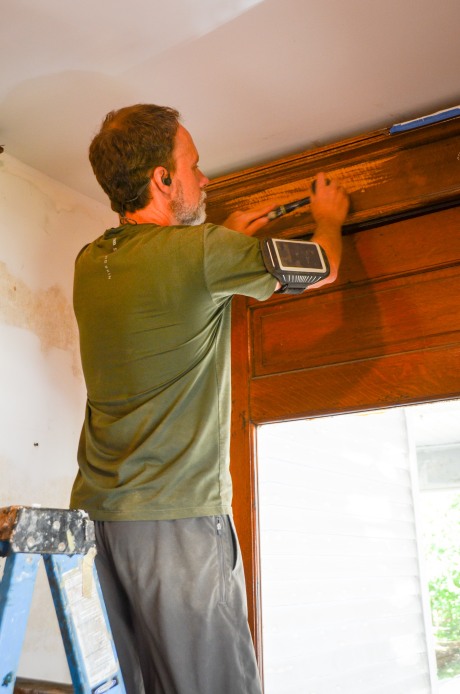 The floor was too damaged from water to refinish it, so we pulled it up, added a subfloor and then designed a victorian-inspired tile pattern for the floor. 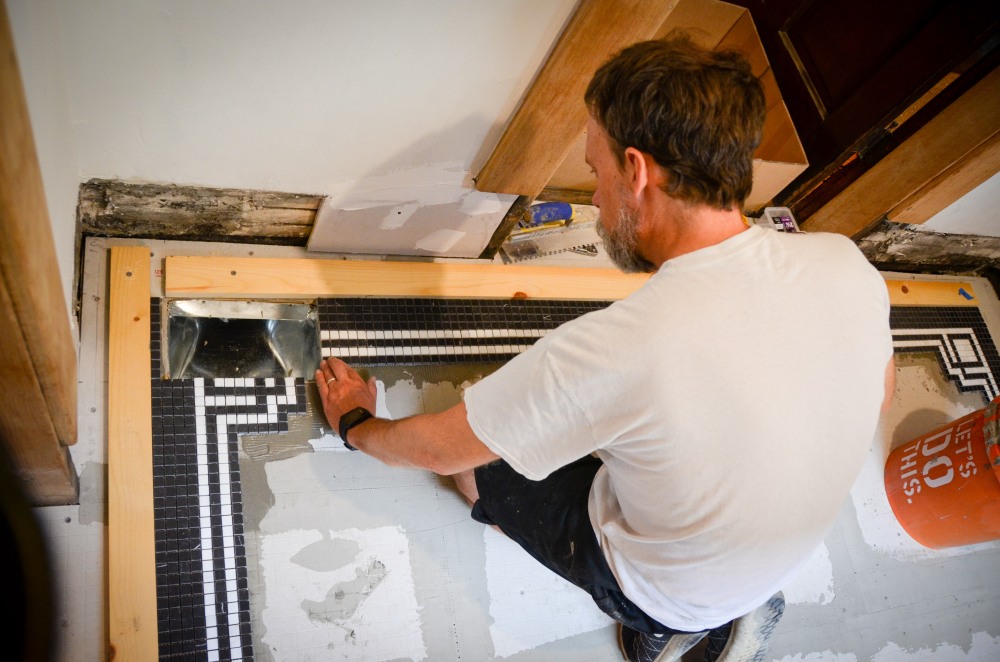 Once the tile was finished, we re-installed the restored baseboards, stained and finished the trim, installed a new light fixture, and finally gave the room a fresh coat of paint.

Except, here is the problem:  I’m not 100% sure the room is complete.  I can’t put my finger on it, but I feel like the space still feels unfinished.  It could be the lack of any fabric or “soft” features in the room.  Or maybe it needs a different color on the walls?  More artwork?  Fancy wallpaper?  I don’t know.  Maybe it just needs a couple hooks on the wall.  Or maybe it IS done.  But since we are wrapping up progress on the house, we might just need to be okay with these last couple rooms being 99% done, pending final touches that will take us more time to figure out.

So here is our 99% completed vestibule!

This is the view from the piano room… 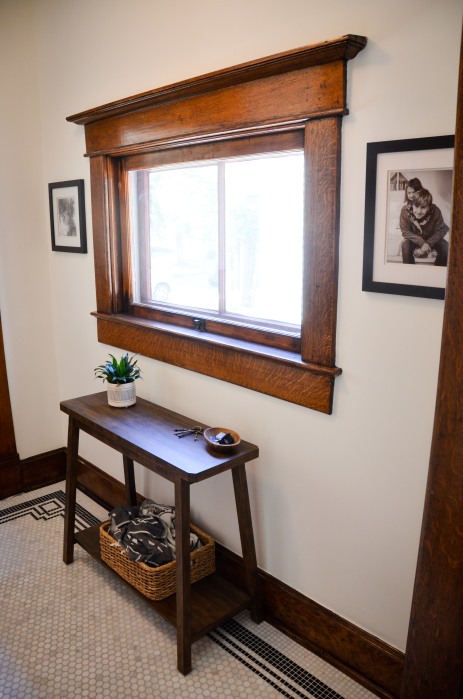 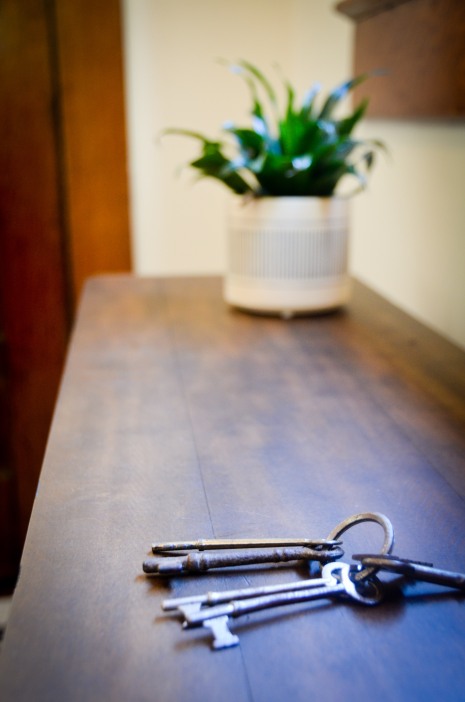 (and yes, those keys actual open some doors in our house!)

From the living room door…

From the front door… 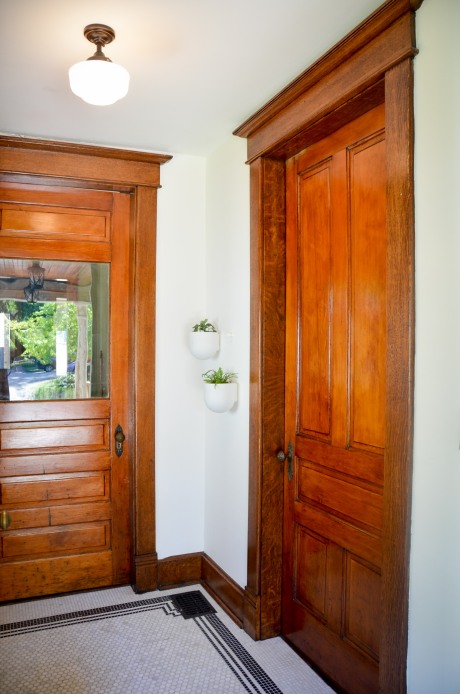 And this was the original condition of the vestibule…

The vestibule is such a small space, but it’s a room we pass through so many times a day.  It used to be so cluttered with coats, bags, dog hair, and backpacks, but we found a new place for a “mud room” (which we will show off in a future blog post) and now the vestibule is clean, spacious, and fresh.  And as a bonus, we don’t have raccoons living above the ceiling anymore!