Despite the lack of recent posts, we have been making steady progress towards finishing the house.  In our last post  we describe the process of scraping, sanding, staining, and finishing all of the woodwork in the dining room.  Since then, we have repeated that process in the piano room and also in the living room.  It is such a tedious job, but it does signal the beginning of the end for each room.  After completing the woodwork, all three of those rooms received new paint (including the ceilings) and new furniture.  Much more on that to come when we reveal those three rooms.  That should happen soon (yeah, I know…  we’ve said that many times before).

While putting the finishing touches on the other three rooms, we decided to get going on the vestibule.  This area of the house is the only area that remains as it was when we moved in.  During the initial renovation process it did get the wallpaper removed, plaster repaired, a ceiling, and restoration work on the window and front door, but other than that…  pretty rustic.

In fact, Amy and I like to say that it helped to lower the expectation of visitors before coming into the rest of the house.

This meant visitors would be pleasantly surprised when they saw the rest of it.  Of course, you could argue that the expectations were already pretty low based on the exterior of the house.

The first step of the vestibule renovation was to remove the floor.  This wasn’t an easy decision.  We initially thought we would try to salvage the floor and refinish it, but it was in rough shape (you can’t really tell from the pictures) and we had little confidence it was going to look good after refinishing.  We finally decided that tiling was going to be the better option.  That meant removing the old floor so that we could install a new subfloor and backer board.

We started by removing the baseboards. 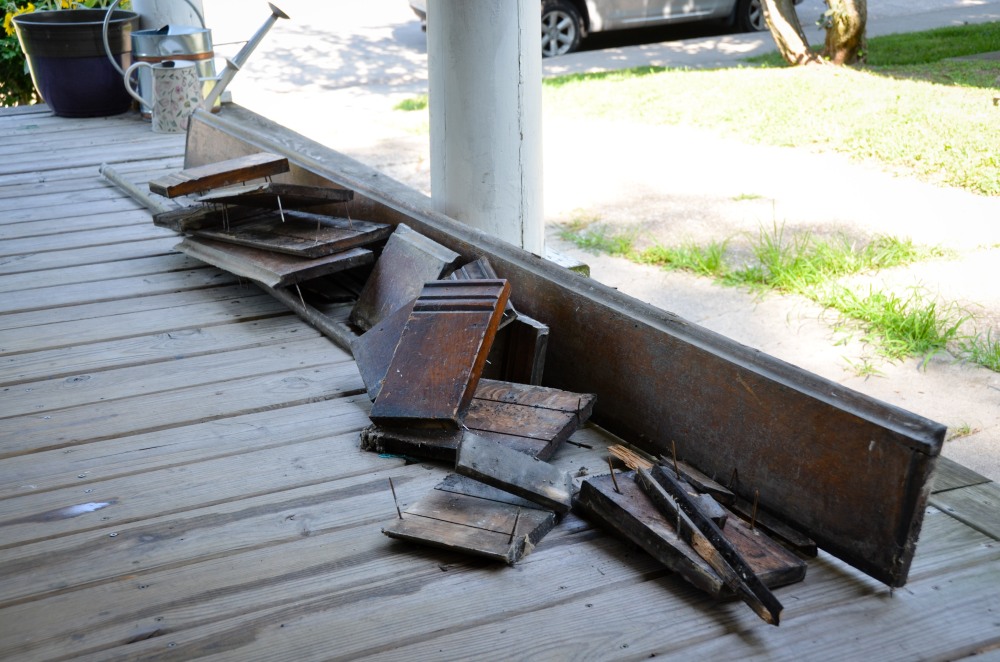 Of course this meant that some of the plaster was damaged…  which means more plaster repair for me.  Oh boy.

The flooring was removed…  [Edit from Amy: …creating a well placed booby trap for unsuspecting visitors.]

and intense thinking commenced.  (I feel like the question mark in the picture below is my actual thought bubble).  [Edit from Amy:  It’s actually spray paint for where we maybe wanted to put an outlet way back when.]

Seeing all the wood on the porch brought back memories from the beginning of the whole rehab process. [Edit from Amy: It also made clear to people on the exterior that we were STILL actually working on the house.] 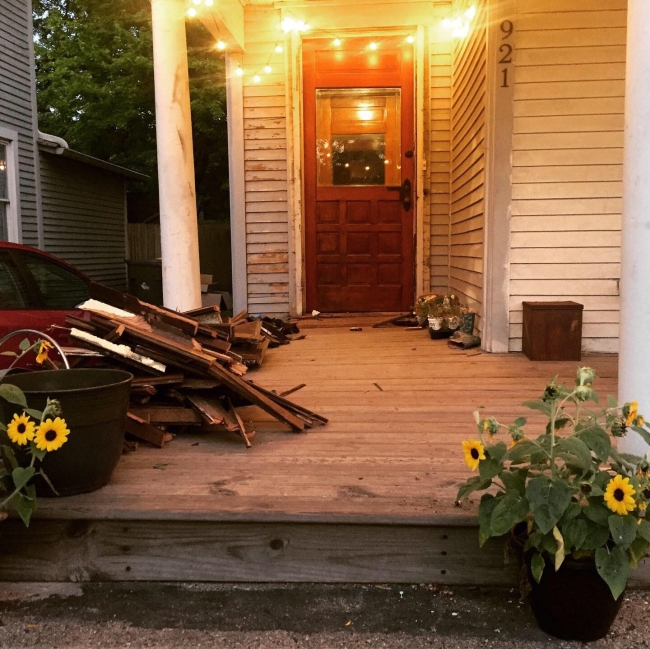 Once we had the new subfloor down (forgot to take pictures of that process), it was time to scrape and sand all the trim.  We had just finished doing the same thing in the piano room and living room, so I really wasn’t in the mood to do it again.  But…

Next we primed the plaster with oil paint.  This was actually a big moment, because it was the last of the visible plaster in the house to be covered with paint.  Kinda sad, really. 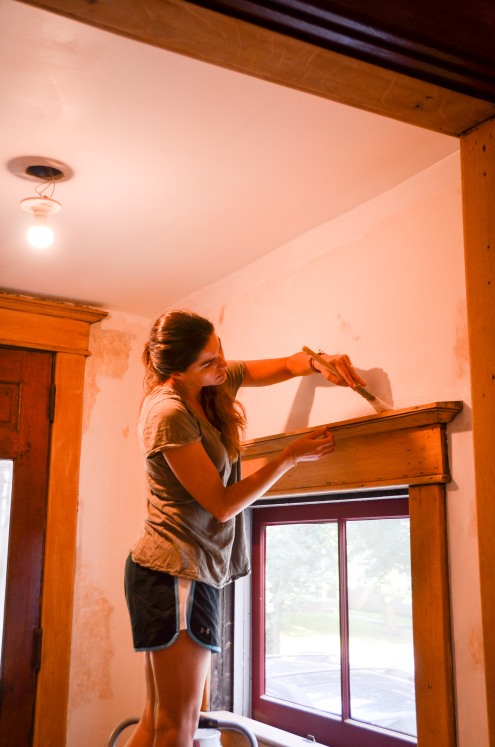 The old air duct to the vestibule vent was in awful shape and was actually leaking a lot of hot/cold air into the crawlspace. That’s what happens when you pay someone to do the work for you (looking at you, HVAC people).  Amy took out the old one and altered new pieces so that they actually fit our 100 year old grate.

Look who actually helped!  The boy underneath that hair is Aiden.  He hasn’t made it into one of our blog posts in years!  [Edit from Amy: Well, he hasn’t come out of his room or the book nook in years.] 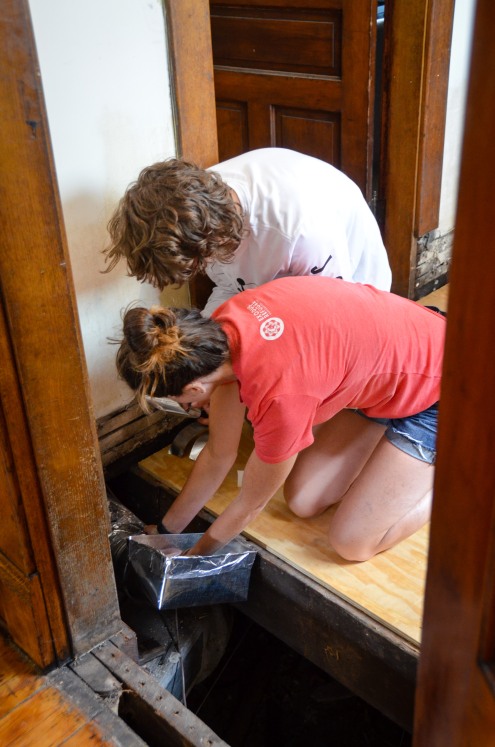 All of that just to get to the point where we could even start thinking about tile.   Once we settled on using marble hex with a marble square border, we began detailing the design and figuring out exact measurements.

We always try to be careful to honor the time period our house when making more permanent choices like tile. We landed on a design that was a compilation of late victorian tile motifs that we researched online. Being able to design something new with the past in mind was a fun creative project.

We have tiled before, but this is our first time doing something that involved creating a border and customized design (technically we created a “mosaic”).  Once we got the tile and installed the backer board, we took a lot of time measuring and drawing out the edges of the border.  We figured that everything else would be fine as long as the border was square and placed accurately in the space.  We dry-fit everything, which gave us an opportunity to quadruple check our measurements….as one does.

It also gave us an opportunity to think about the order in which we wanted to lay the tile when it became time for us to mortar.

The area outside the border (called “the fill”) wasn’t going to be too critical because it would end underneath the baseboards and would all just depend on the accuracy of the border.

Before we pulled up the border to begin mortaring, we decided to make sure that it stayed square by taking many final measurements and then screwing down guide boards to keep the edges of the border from drifting as we laid the tile.

Once we were satisfied with the square marble, we carefully labeled everything in the order it was to be laid and moved it to the room next door.  It looks a little crazy, but there was actually a system to it. 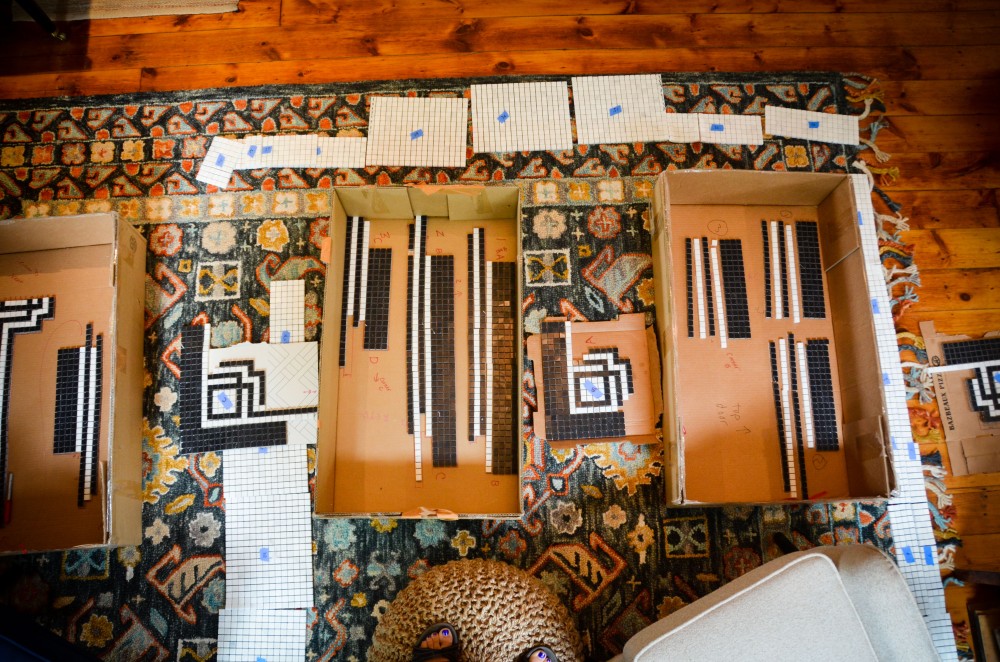 Now it was finally time to do it for real.  For the most part, the border proceeded without incident.  As a side note – I think tiling is one of the more stressful rehab jobs.  It’s just really hard to redo something if it goes wrong.

After also mortaring the outside “fill” it was time to do the hex tile.  This involved a lot of cutting and careful placement of each sheet.  Somehow we forgot to take pictures of cutting the tile.  Laser focused on the job at hand, I guess. 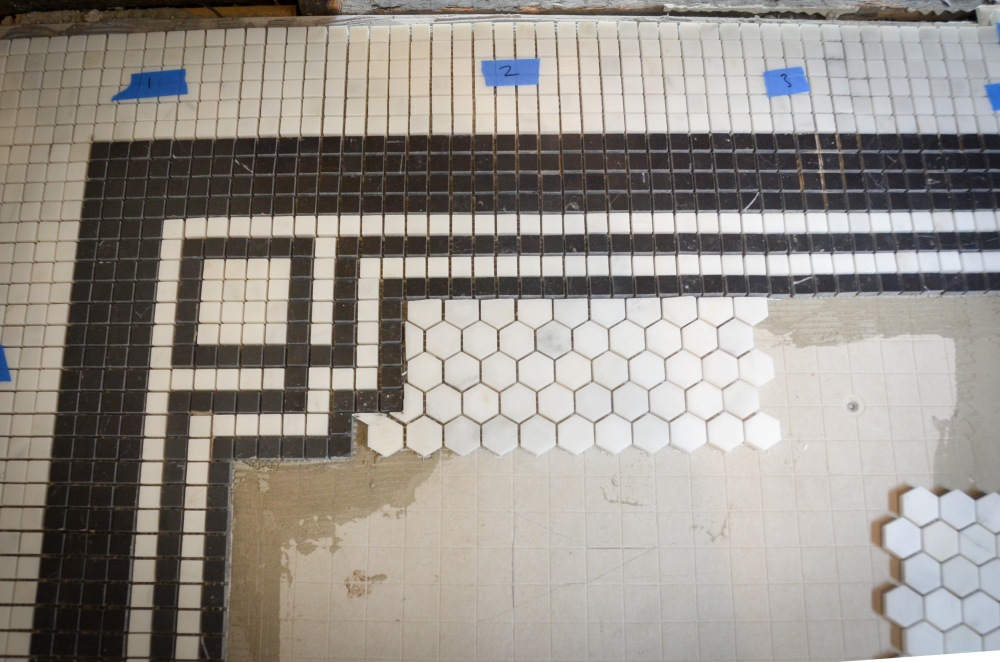 Once again, we dry fit everything first, then labeled it, removed it, and did it all again – but this time with mortar. 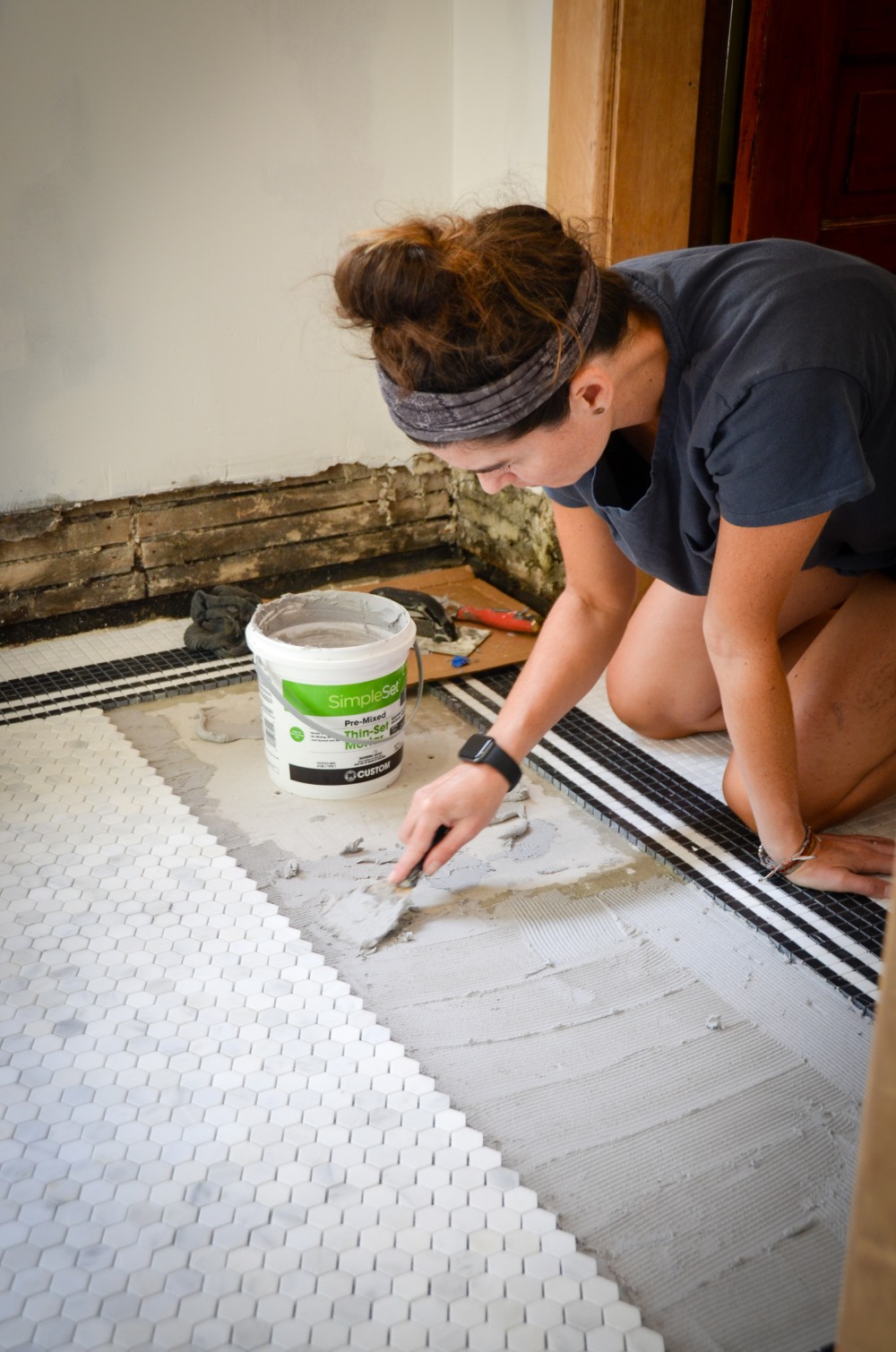 Miraculously, it all worked out!  No major issues, no drifting, no do-overs.  You can’t really tell from my face, but I’m happy.  That’s my happy face. 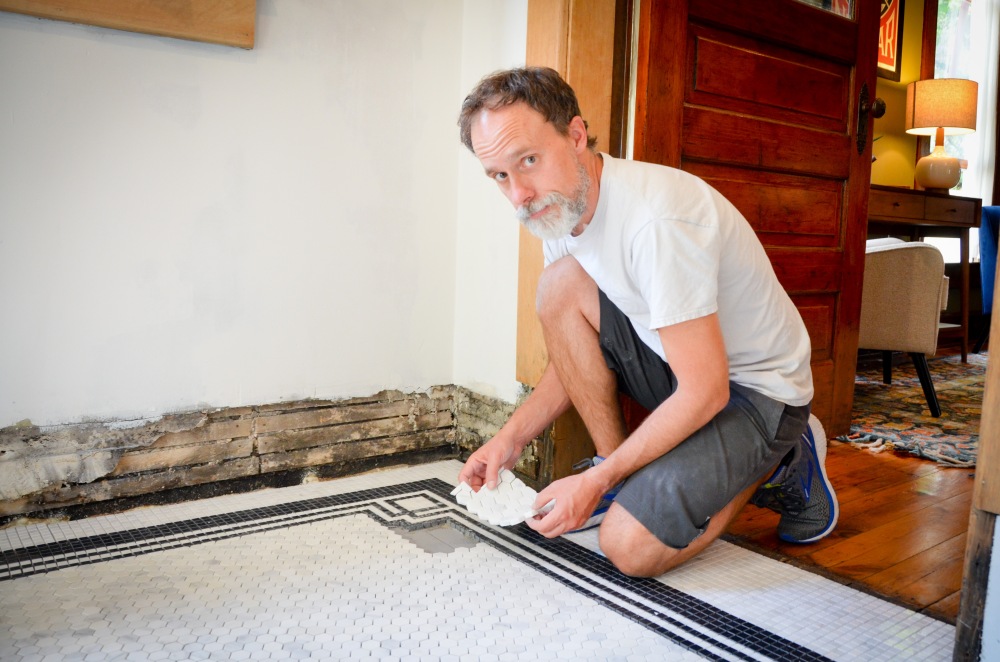 We chose a light grey for the grout.  We had a minor panic attack (and by “we” I mean “me”) because the grout was more grey than I thought it was going to be and also seemed to turn the tile more grey.  I did not seal the tile before doing the grout…  apparently people do that with marble because it is porous and can absorb the color of the grout.  But the next morning, when it was dry, everything looked just fine.  We used a polished marble, so maybe it didn’t need to be sealed prior to grouting?  I’m still not sure.  We obviously sealed the grout and marble afterwards.

We really like the fact that the marble is all a slightly different color.  It gives the floor so much depth and warmth. We wanted the finished product to look old, like it’s been in our house all along.

We still have a lot of work to do in the vestibule – including making new transition pieces  under each doorway, re-installing the baseboards, sanding all the woodwork one more time, then staining and finishing it, painting the walls, installing a light fixture, and figuring out the furnishings.  But the most stressful part is done.

We end with exciting news…  it seems that we may have FINALLY found someone to work on the exterior of the house AND the interior staircase!!!  I don’t actually believe it yet, but in theory we might be done by Spring.  Maybe.  We’ll see.