The kids’ rooms are slowly nearing completion.  We seem to be bouncing back and forth between these two rooms, possibly just procrastinating the final decorating decisions.  The first major project we completed in Lucy’s room (post-renovation) was the built-in dresser.  Next, we moved on to the window trim and built-in bed for Aiden’s room.  Now we are back to finish off Lucy’s room by taking care of her built-in bed and doing the final painting.

Before I get to the big reveal of this latest built-in project, I wanted to share some pictures and information about the other smaller projects that have brought us a little closer to finishing the kids’ rooms.  The award for least rewarding, least gratifying, and least glamorous project goes to Amy for her work on the exposed brick in Aiden’s room.  This brick hadn’t been touched in decades and was covered in dirt, grime, and additional debris from our renovation project.

Edit From Amy: These bricks were nasty. I made an abrasive paste using dish soap and salt to scour them. There was also quite a bit of spray insulation clinging to the bricks, especially near the ceiling, that needed to be chiseled off. While I can tell you that scrubbing bricks is not my favorite Sunday afternoon activity, they do look much cleaner. We plan to go over them with a sealant to help bring out the deeper colors of the bricks as well as make them resistant to absorbing any more dirt. After all, they are in Aiden’s room.

Here is a picture of the cleaning process…

And the result after our initial cleaning…

It was finally time to start making the trim for the new windows.  I didn’t have any experience with this, but I did completely deconstruct and rebuild the window trim for four windows in the kitchen.  I understood all the components and have acquired all the necessary tools, so why not give it a try?

I started with the stool and apron.  The stool is what most people would call the window sill (but that is actually on the exterior of the house) and the apron is the trim piece that goes against the wall underneath the stool.  The window stool was going to be 3/4″, so I measured down from the existing jamb and installed a piece of wood that wood be flush with the new drywall.  I used this to secure the apron and provide a ledge for the stool to sit on.

Next, I cut the stool to fit flush with the jamb and also create an overhang around the apron.

So far, so good.  I chose to stay very simple with the style and just match the existing trim that is upstairs in the original bedroom.

Now for the tricky part.  As with many projects associated with this type of renovation project, it is very difficult to find resources online that pertain to our exact situation.  Typically the “how to” articles that you find online are fine if you are operating with an ideal scenario…  you know, straight walls and stuff.  In my case, I wasn’t sure how to deal with the fact that the window jamb didn’t  line up flush with the drywall because the width of our walls are wider than standard (because old 2x4s were actually 2″ x 4″).  To make matters worse, this particular wall is not perfectly vertical. 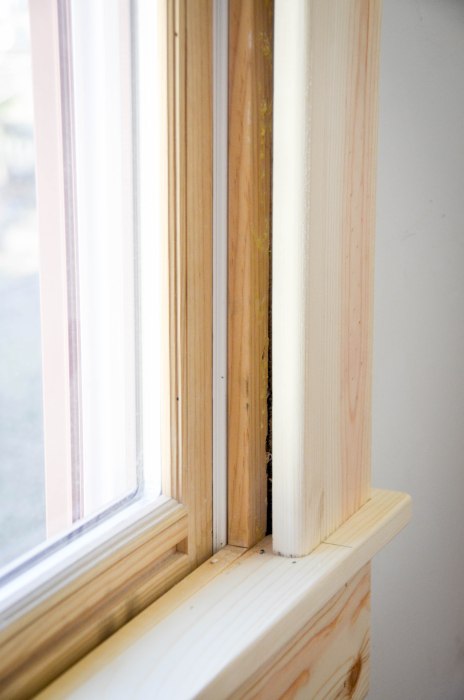 Then used my brand new electric hand planer (woohoo!) to plane the strips of wood to be flush with the drywall. 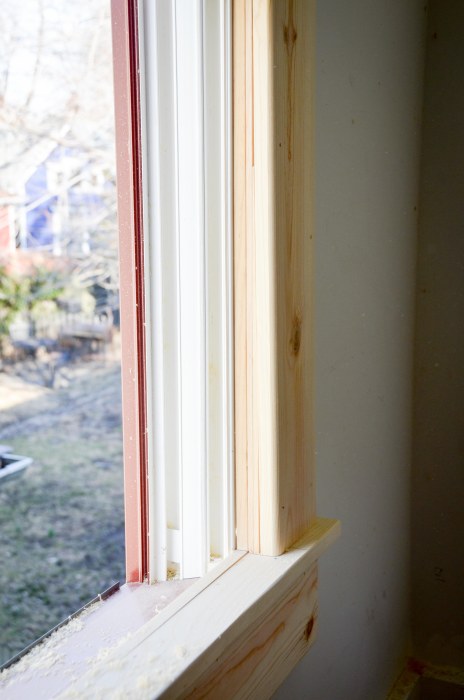 This got me close enough to finish off the fix with sanding, wood filler, and caulk.

The rest of the casing was pretty straight forward, although I still had to add extensions to the jamb and then plane it off to be flush with the drywall.  I milled the side casing and head casing (using my new-to-me router!), but I was able to salvage some old corner pieces for decorative touches that match the rest of the house.

Once everything was in place, I went back and filled in the nail holes and sanded any areas that were a little uneven.  I really have no idea if I did every technically “correct”, but if there is anything we have learned from this house project it’s that there isn’t actually one single correct way to do anything.  The final result exactly like the windows in our bedroom, it’s sturdy, and I think it could pass for the original casing.

I won’t go through every single trim project I have now completed, but I did also do the trim for the inside and outside of Aiden’s doorway and also the outside of Lucy’s doorway.  The other BIG window project recently completed was in Lucy’s room… 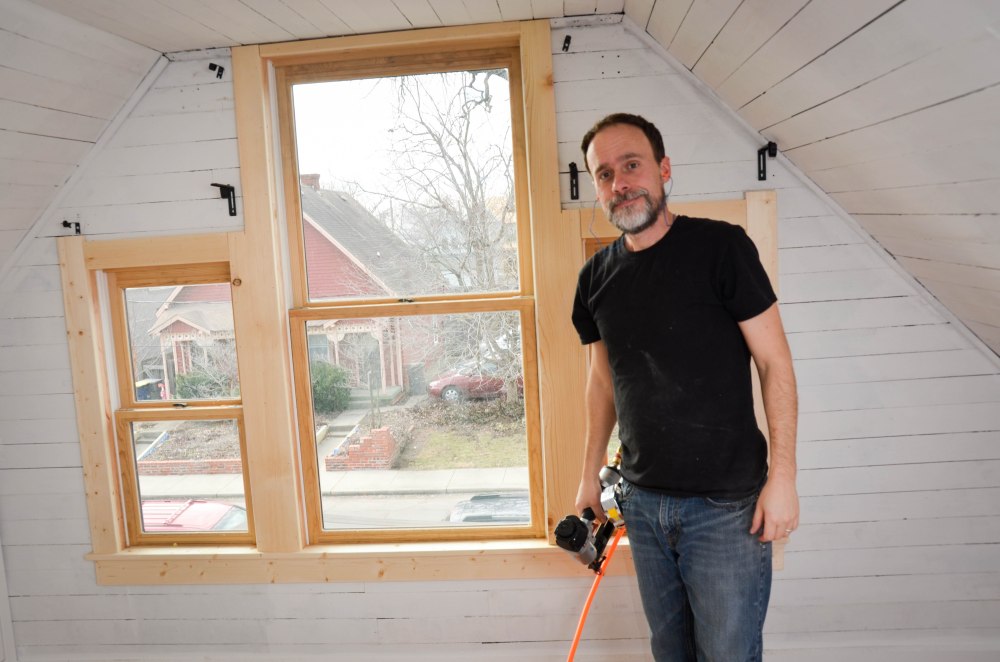 But now, on to the LAST built-in project (I think).

I began with the same simple wood frame we used with Aiden’s bed that we found at IKEA. 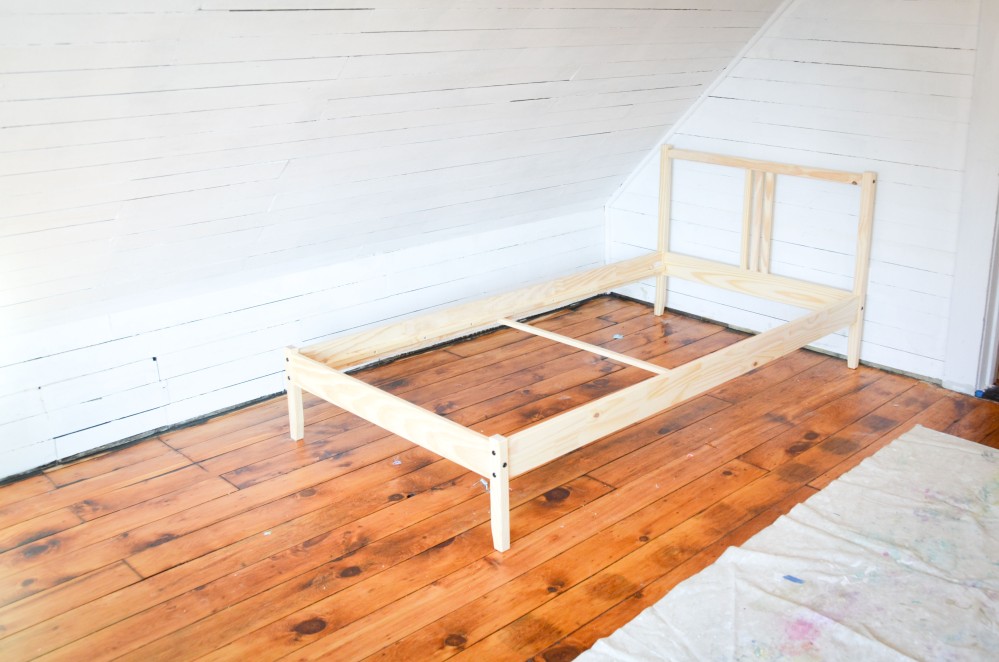 Once again, we wanted it closer to the ground and didn’t want a headboard, so I made the necessary alterations. 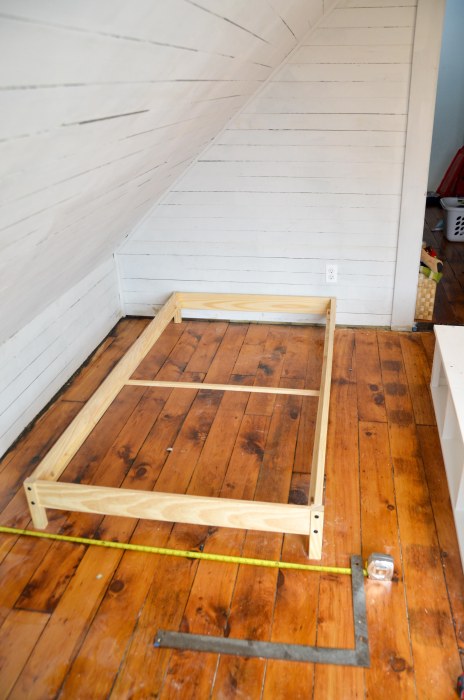 We wanted to do a ledge on the wall-side of the bed and then also decided we wanted a short book shelf at the foot of the bed.  I added framing for both of these features, stopping frequently to check measurements so that it would fit perfectly with the IKEA furniture I was going to incorporate. 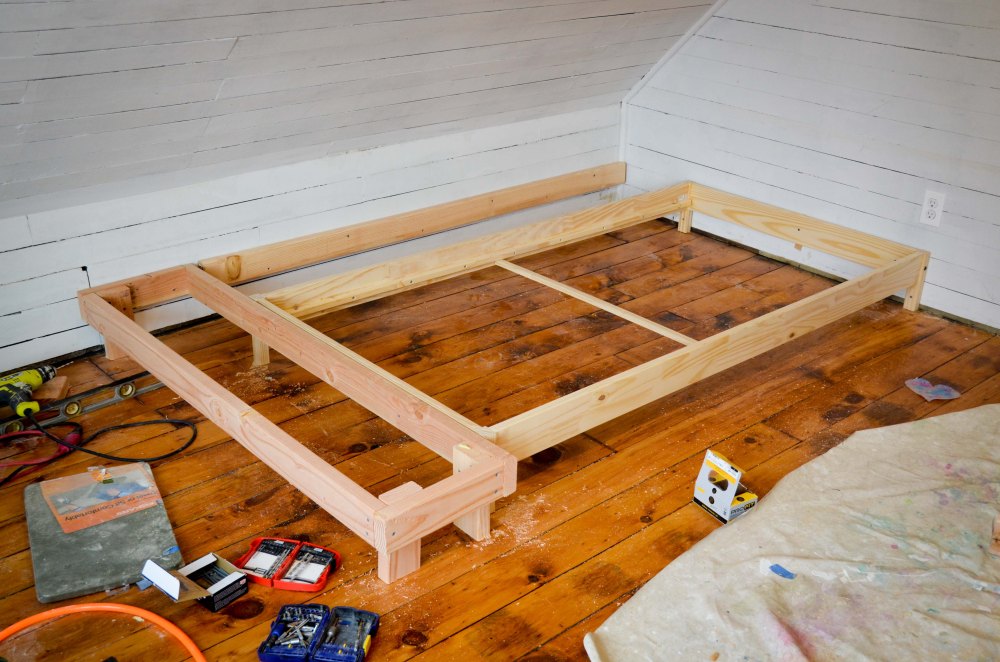 The IKEA piece I used was a part of the same Hemnes series that I used for the built in dressers.  This piece is actually supposed to be a horizontal shelf that connects two tall bookshelves.

I added a ledge all around the bed, trim pieces around the ledge, milled new baseboards that wrap around the entire structure, and secured the bookshelf. 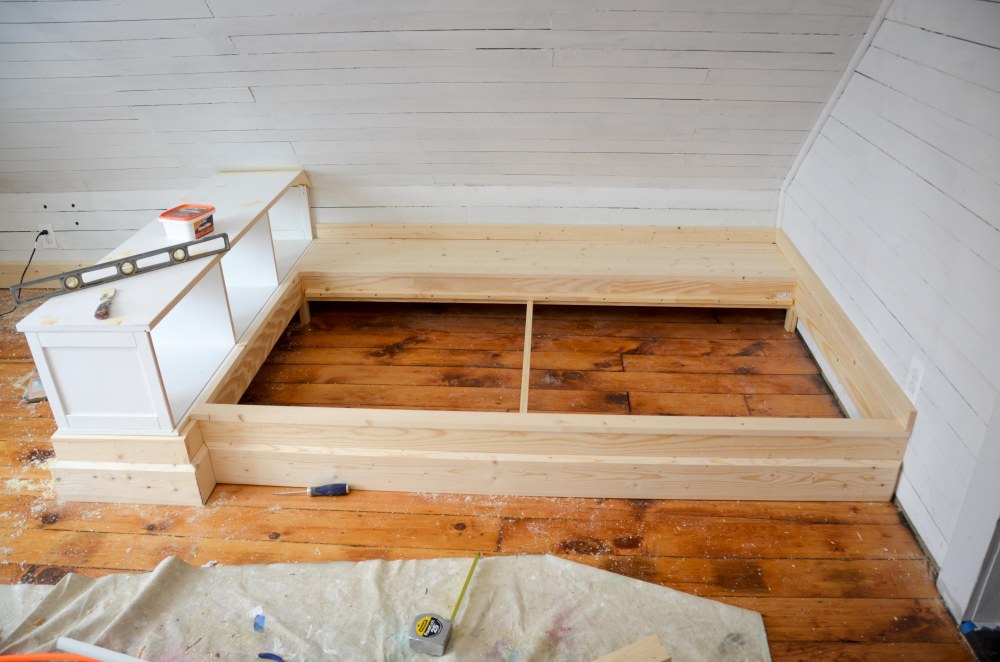 The bookshelf came with cheap backing, but since the back was going to be very visible I replaced that with a 1/4″ sheet and added decorative horizontal and vertical pieces to match the rest of the Hemnes design.

Edit from Amy: There is more than just painters tape holding this together, right?

I finished everything off with quarter-round, wood filler, and caulk.

We FINALLY found time to prime and paint the built-in and followed that by painting the walls.  Lucy’s room is almost done.  The only thing that remains is to decorate with artwork, rugs, more lighting, shelves, and toys!

And now, the mattress is off the floor! 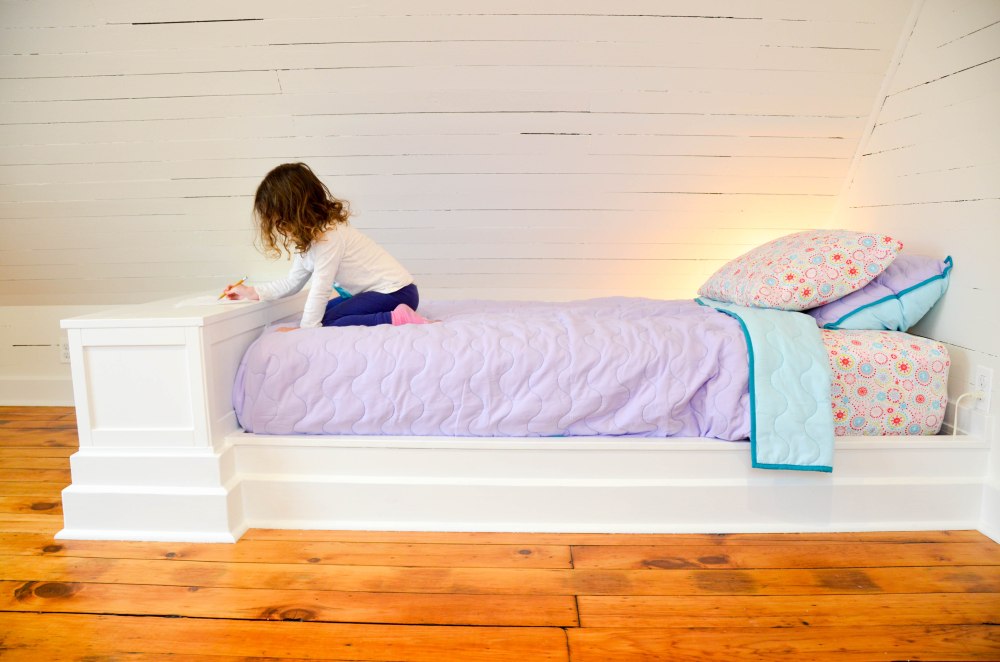 One cool perk of Lucy’s room is that you have a great view of the city skyline.  In the picture below you can kind of see a skyscraper through the left window. 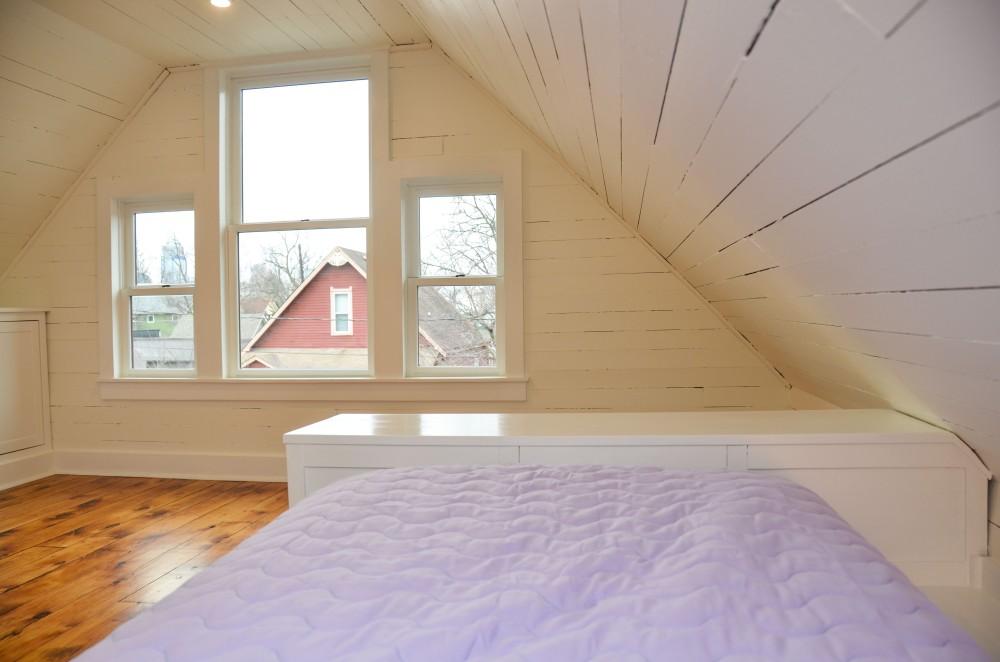 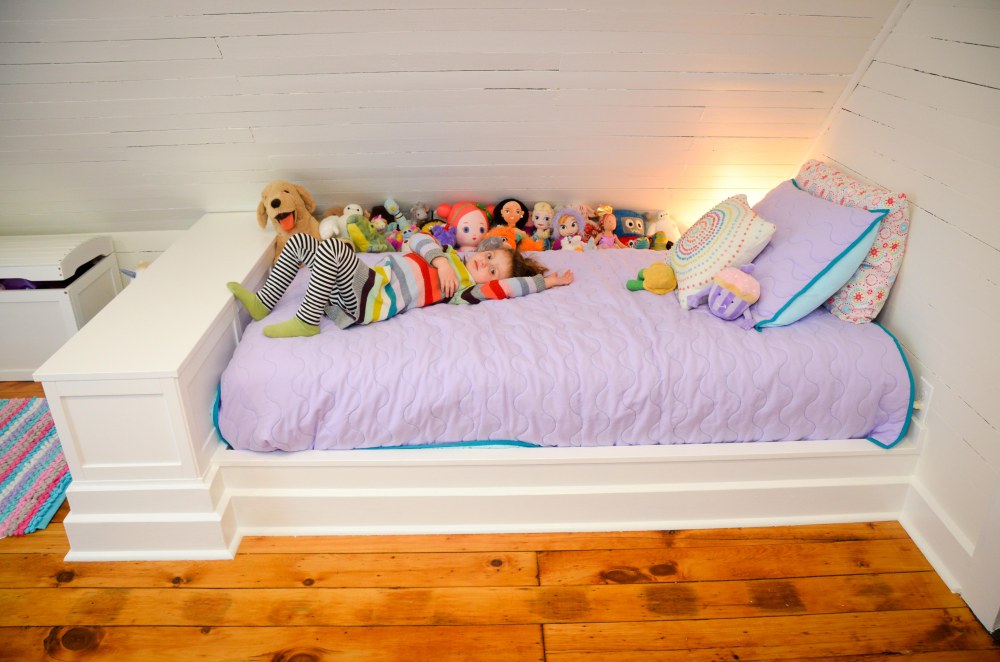 We could not be happier with how Lucy’s room is turning out.  All major construction is done, the painters tape has been removed, the floor has been vacuumed and cleaned and all tools are finally removed.  We will do one more post once the decorating is done and take one last look at the all the work it took to create this room for our daughter.