We mentioned in our previous post that we had not yet finalized the floor plans for our renovation.  One thing we did know was that the kitchen was going to be in the back of the house and that we were going to need to remove the bathroom and pantry to create more space.  This meant we could get started on the demolition while we were continuing to figure out the rest of the house.  Anxious to begin, we went over to the house on a Friday night after dinner.  Aiden, as expected, loved the idea of whacking a wall with a hammer.

Amy started taking down shelves in the pantry.

And Lucy gave us an early indicator of how difficult it was going to be for all of us to be at the house at the same time. 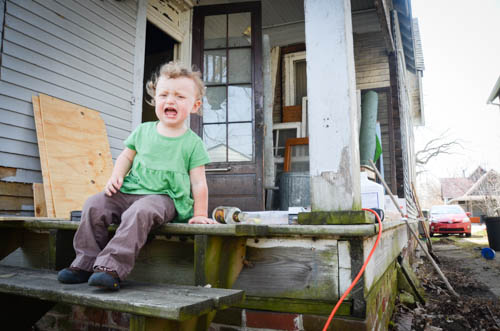 Aiden surprised us by volunteering to help me the next day as I continued with the demolition work.  Maybe it was just better than the other option – groceries and errands with Mom.  The plan was to knock down two walls – the one that separates the kitchen from the other half of the room and the one that separates the bathroom from the pantry.  We got started early and were determined to finish the job that day.  Aiden was enticed with lunch at Pogue’s Run Co-op and then Dairy Queen when the job was done.  Plus he got to take a trip to the landfill!  What 10 year old doesn’t like that?  At least once.

The Sawzall took care of the plumbing in the bathroom and I was able to just rip out the sink and toilet.

As a reminder, here is what the kitchen looked like before: 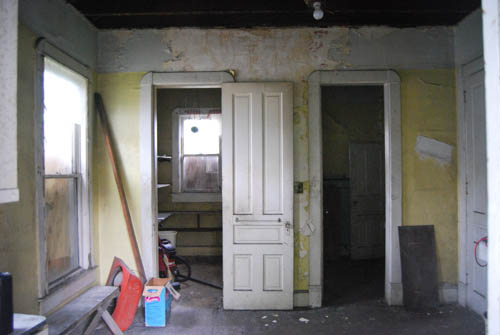 Here is what the kitchen looked like after the first day:

Fast forward to the next weekend.  After a quick check from our architect we were cleared to take down the studs.

In an effort to fast forward our progress, Joe took a personal day off work to do this job. As Amy is walking out the door, with a toddler, three lunch boxes and a coffee in hand the last thing she says to her husband is, “Don’t forget your phone.” Now, two important things to make note of. 1. Joe NEVER forgets his phone, so I don’t know why I said that… and 2. When Sawzaw-ing 10 foot walls from the top of a ladder, have a partner, and at the very least a phone lest you sawzaw your face off and need to call your lawyer and finalize your will. You can guess what happened. No, he didn’t sawzaw his face off but nearly as bad, he forgot his phone.

Amy tends to let her mind go down the path of worst case scenarios.  I’m thankful that our friend (and now, neighbor) Kelly was able to come verify that I was not dead so that Amy didn’t have to leave her job to come check on my well-being.

Back to the progress report: We decided that the plaster was in such rough shape in the bathroom and pantry that we would just go ahead and gut those areas and take it down to the studs.

Of course, removing the plaster and lath from the walls would also mean removing all the trim from the windows.

After another weekend of work, our architect pointed out that we might just want to go ahead and remove all the plaster in the kitchen because of all the plumbing, electric, and cabinets that would be hung.  Hard to argue with that logic, plus the plaster in the kitchen was generally in rough shape, we were going to have to repair multiple areas of plaster from removing the sink, and now we could insulate all the walls.  It all came down.

The Mott sink was difficult to remove, but we figured it out eventually.

Same wall, afterwards (notice the sliding door that opens up to the built-in in the dining room).  We will eventually cut out those doors because we will use that wall for the bulk of our appliances and cabinets.

Here is a close-up of that pass-through door.

Here is what we learned from our first experience with plaster walls:

1.  Removing plaster is messy and plaster dust goes everywhere!  We had been warned about this, but now we know for sure.

2.  Your hands are soar the day after (or maybe that’s just because I have delicate musician hands?)

3.  Cleaning up the mess is WAY worse than knocking it down.  Plaster is very heavy and you can’t put much of it into a bag.  This makes the clean up process very tedious and time consuming.  Plus, it just kicks up all the plaster dust again.

4.  Removing plaster is fun for first wall, then…  a lot less fun as you go.

5.  The work never seems to end.  The job isn’t over when the plaster and lath are gone.  It just moves on to removing studs, removing trim, removing nails from studs and continually picking up lath and other debris.